HomeKnowledgebaseMinecraftHow much RAM do I need for my server?

How much RAM do I need for my server?

The amount of RAM a server should have available has been a hot topic since multiplayer first arrived.  Here at VAHosting we would like to rectify a few misconceptions to ensure our server owners get the most out of their server packages.

It is important to note that the sheer quantity of RAM is entirely subjective, but rather the way RAM is utilized is most important. For example, a standard Vanilla server will typically utilize much less RAM than the likes of a Spigot / Paper server, however, the same Spigot server can make much better use of the RAM through better optimization and configuration.  Although we cannot tell you exactly how much RAM is needed, you can see below for the minimum recommendations per server type:

What is the minimum amount of RAM that is needed per server type?

How much RAM do I need for X amount of players?

Again, it's entirely subjective. There is no specific value you should be looking for when it comes to RAM, however the general consensus is roughly 1GB  per 20 players.  This is a recommended amount to allow your server the space to breathe should it be needed.

The amount of RAM needed also depends on the version of Minecraft you are running. Minecraft below version 1.8 can typically run on 1GB of RAM.

Minecraft versions above 1.13 would benefit most with 3GB or more of RAM.

You will also need to keep an eye on your servers Memory usage, if it is constantly at 100%, you will need to upgrade the RAM for that server to keep it running smoothly, you can upgrade or downgrade the RAM at any time through your billing area.

What happens if I constantly run my server at 100% RAM?

Running a Minecraft server at 100% RAM can and most likely will cause issues with your server.  One of the most common issues is lag.  Lag can be anywhere from small stutters to large spikes.  Another issue that is common with running a server at 100% RAM is file corruption.  File corruption can be gradual. Oftentimes you do not notice it until it is too late.  File corruption happens when the server does not have enough time to write files to the drive from RAM before the RAM is needed for something else on the server.

To make it easier to decide how much RAM you should start with, we have added a legend to our plans that will help you choose:

You will see on the 1GB Basic plan, it is only suitable for Proxy servers, and may run Bedrock, Bungeecord Lobby’s, and Minecraft before 1.8.  It will not run Minecraft above 1.8, handle Plugins, or run Modpacks. 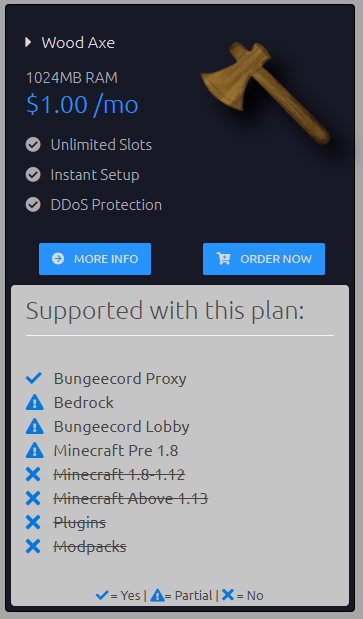 On a 3GB Basic server, you can run more: 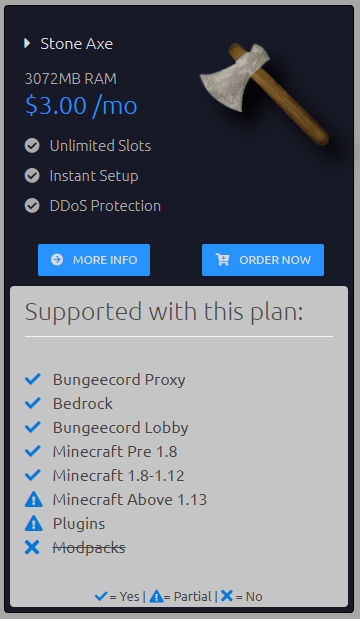 On our Premium servers, you can also run Modpacks, as shown in this example:

A server is already running on that port

The error "a server is already running on that port"This error is cause by minecraft not sutting...

Cannot connect to my server "authentication servers are down"

Cannot connect "authentication servers are down" This is normally cause by mojang being down or...

Should I back up my files/server

At VA Hosting LLC we do our best to protect your files/serverIt is always a good idea to back up...

How do I use Dynmap with my server (VA Hosting LLC)

There are 2 settings that need to be changed in your dynmap configuration.txt, this file will be...

- The best server I've had so far for so cheap! I totally recommend!...

- Great service! I had a small question and immediate feedback and support...

- Nothing is wrong with this hosting everything is perfect...

- I've been a VAHosting customer a little over two years now and I am very satisfied...